A drizzly and slow wake up on the last morning of the IQFOiL International Games in Campione, Lake Garda, organised by Univela sailing, Società Canottieri Garda Salò and the iQFOiL Class; but the sun, just like the excitement, was just behind a thin layer of clouds, as the knock-out Medal Series were in sight.

A revolutionary system for the next-to-be Olympic sail board, with three races for the top 12 of the Opening Series: a Quarter Final among riders from 12th to 5th, four then access to Semi Final joining the 4th and 3rd overall, and the first two to cross the finishing line go on to compete in a winner-takes-all Grand Final race with the 2nd and 1st of the Opening series. 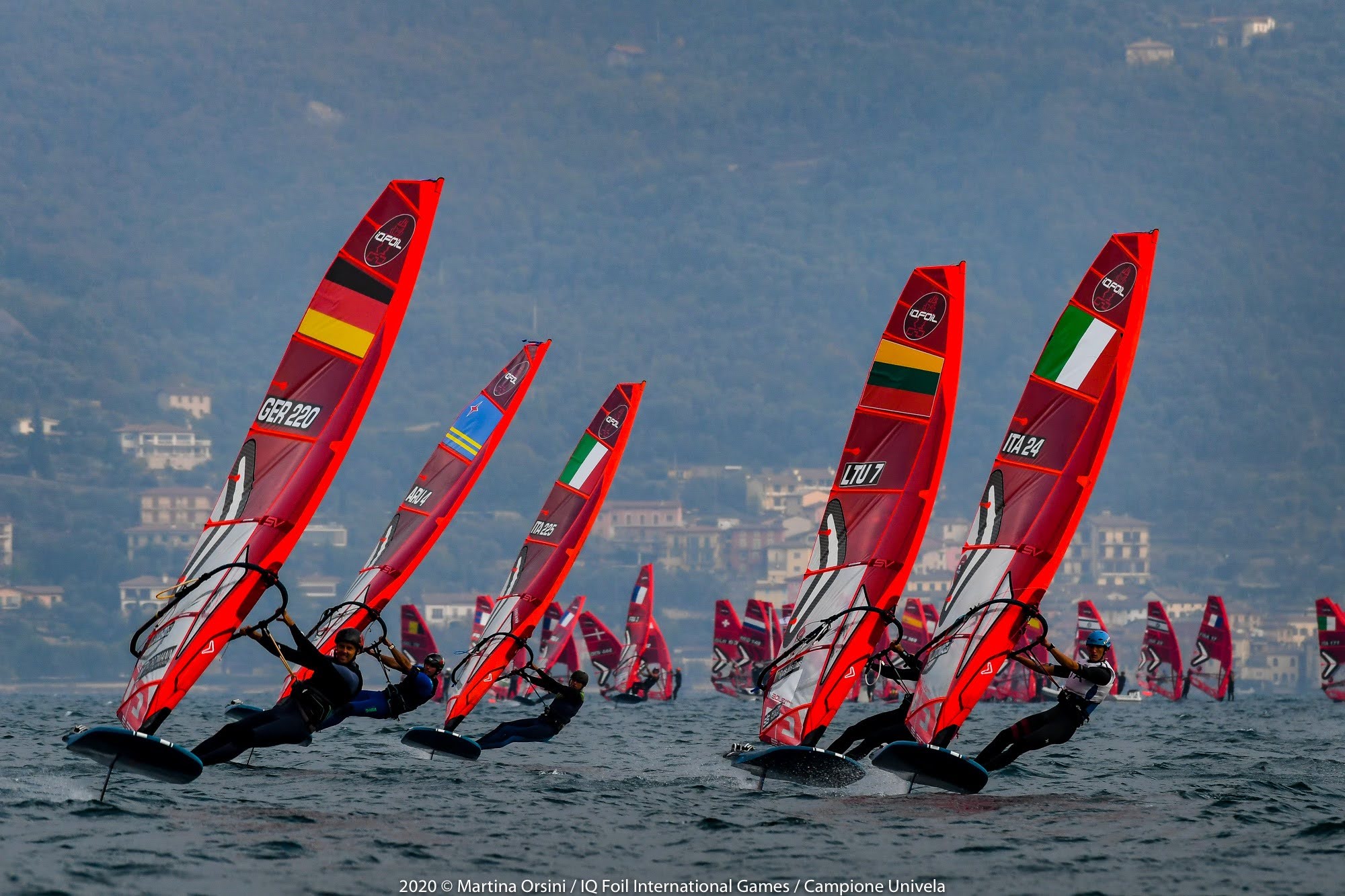 After a quick check of the equipment at the pit lane and a very short wait ashore, it was time for the Medal Series to begin. The America’s Cup style Course format with about 15 knots proved to be fast, exciting and with plenty of action: a dashing reach start and then on to a short and pumping downwind, back up windward and another breathtaking reach to the finishing line. Men and Women were quickly alternating on the racecourse, with the ones waiting their time to race carefully monitoring the action and conditions.

In the Men Quarter Final Huig-Jan Tak (NED), followed by Alexandre Cousin (FRA), Samuel Sills (GBR) and Matthew Barton (GBR) made it through to Final joining Matteo Iachino (ITA) and Kiran Badloe (NED) in another very tight race. Huig-Jan Tak went on to win also the second race of the day and with Alexandre Cousin advanced to a winner-takes-it-all Grand Final where Sebastian Koerdel (GER) and Nicolas Goyard (FRA) had been waiting. A nice start by the German boarder who managed to round first at every mark extending his lead up until the finishing line winning the event over the best riders of the world of the Paris 2024 foiling class. The silver medal went to Nicolas Goyard and the bronze to Huig-Jan Tak, who more than anyone else profited of the knock-out system and was able to step on the podium from a 10th overall in the Opening Series.

“It was very exciting, I kept my nerves together, I had an ok start but had superior speed in the reach and then could hold on to my advantage until the finish line: I am happy! – says an enthusiast Sebastian Koerdel – Now on to some off time, because from Silvaplana to now I haven’t rested, I’ll be home to monitor the global situation, getting ready for next year and possibly win an official world title next time..

I’ve finished the first race of the week in second and I’ve been second up until today, always fighting with Nico (Goyard): he had some edge in Course racing (so I know where I have to work on), and I was a little better in the Slalom, I won all of them. The Final Series is such a great format, the reaching start is amazing, I watched the first two from the water and they are literally flying over the start creating such a spectacular show! I also like the knock-out system thanks to which you can improve a lot your position, but with a fair safety net for the top four guys that cannot go lower than fourth.” 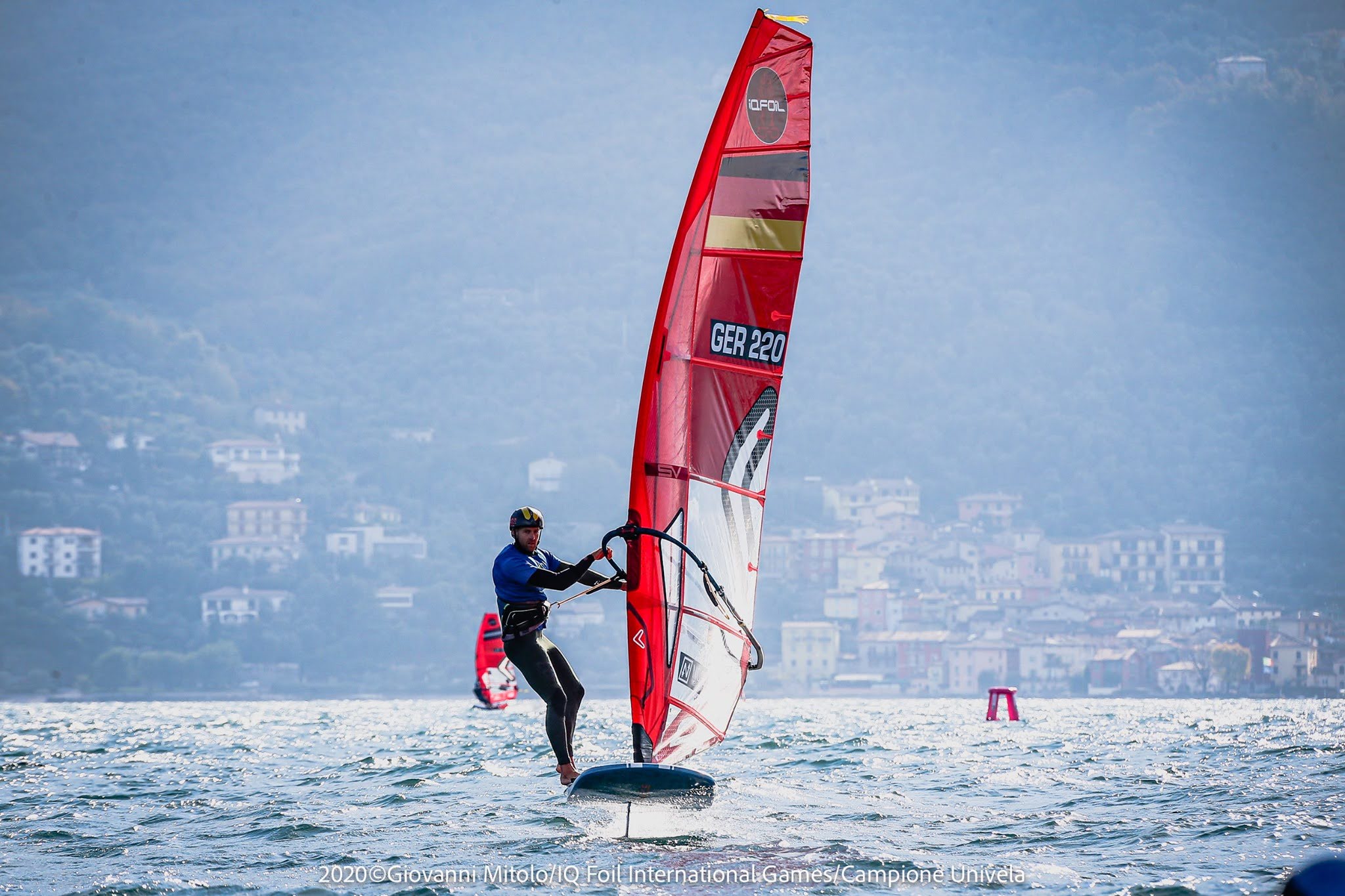 In the Women Quarter Final Lilian de Geus (NED) was on fire, winning with a solid margin over Islay Watson (GBR), Lucie Belbeoch (FRA) and Pilar Lamadrid Trueba (ESP), all advancing to the Semi Final with Noy Drihan (ISR) and Dephine Cousin (FRA). The wind was a bit less intense, but still well over 10 knots, and it was another magnificent race by Lilian de Geus who smoothly crossed the finish line heading to the Grand Final along with Noy Drihan. There they joined Maja Dziarnowska (POL) and Helen Noesmoen (FRA) who had been leading all week. A rocket-like start by Lilian, who fell in the first reach for pushing too hard thus loosing control of the foil, leaving the other three on the podium. Noy Drihan rounded first the first mark and extended her lead up to the finish, followed by Helen Noesmoen and Maja Dziarnowska.

“I am very happy, it was stressful – says Noy Drihan – I started from the second race and managed to go to the Grand Final where I won the competition and it makes me so happy and proud! I liked the knock-out format, it is super stressful but I loved it!

“I am an RS:X boarder and I am still competing for a spot at the Tokyo Olympics, but I love the foiling board a lot, it is so much fun!! Here we might have a slight edge in the Course format because of the tactics, but the girls coming from the PWA are better in the Slalom, it is good that these two worlds are joining together and we are all improving day by day.

“From tomorrow I will go back to my training in the RS:X, leaving the iQFoil to rest for a while.” 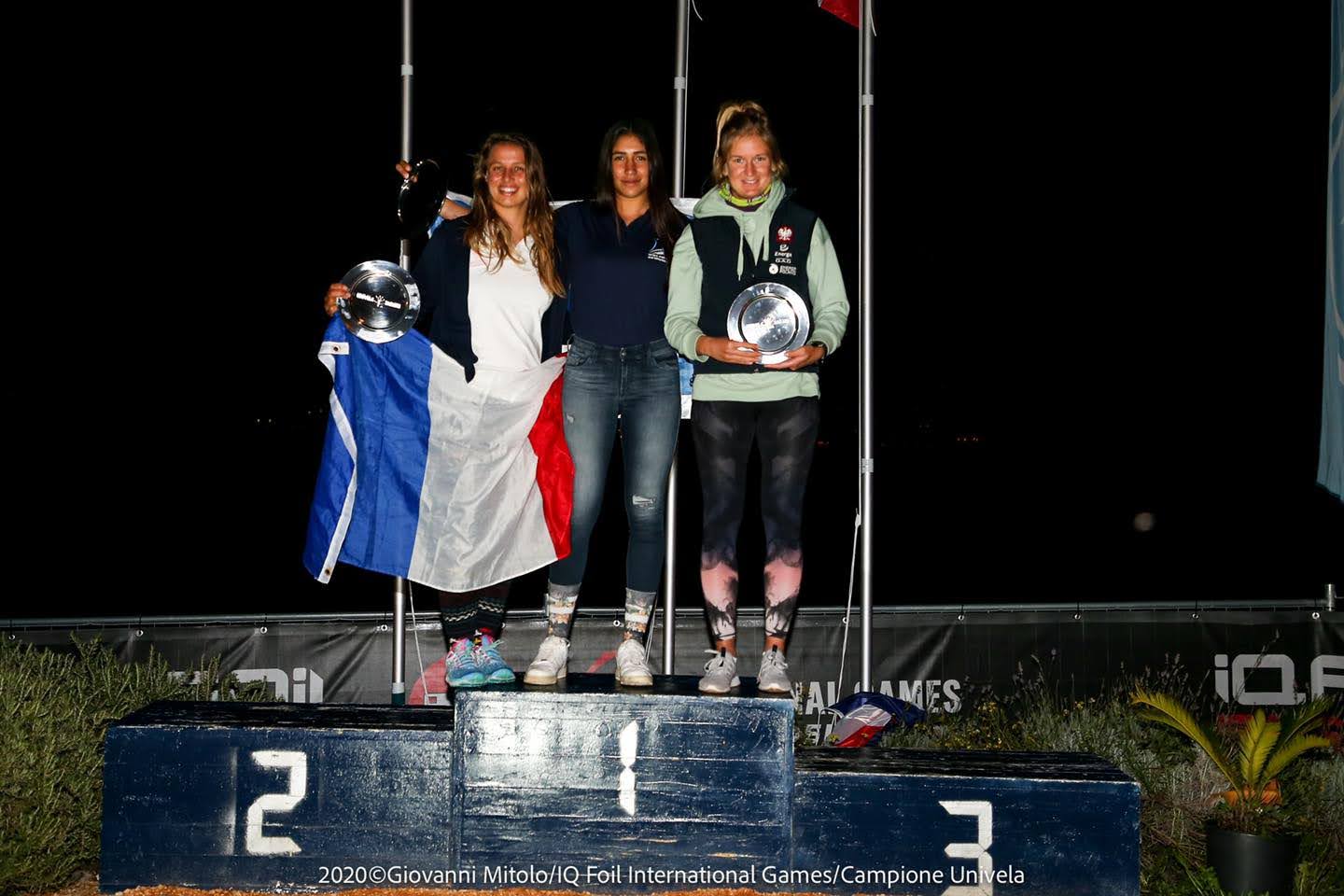 While the winners celebrated, the rest of the athletes went back on the water for a few more races, recording some changes in the youth rankings, with a beautiful southerly breeze, the ‘Ora’. The iQFOiL International Games end with an impressive set of races completed in every format by everyone, and with great enthusiasm and expectations for the new foiling Olympic sail board, which found a perfect location at Univela Sailing and Lake Garda this week. 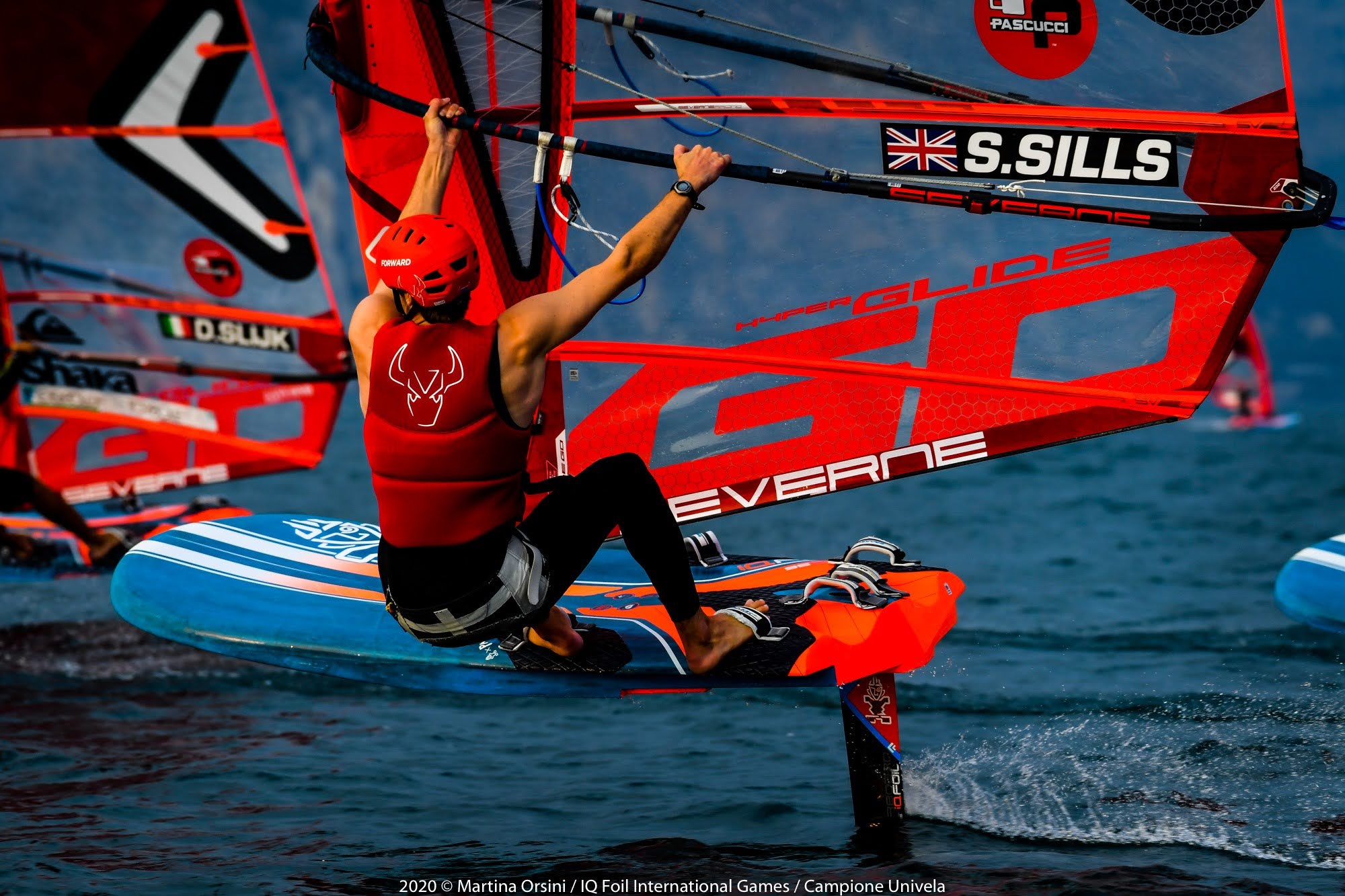 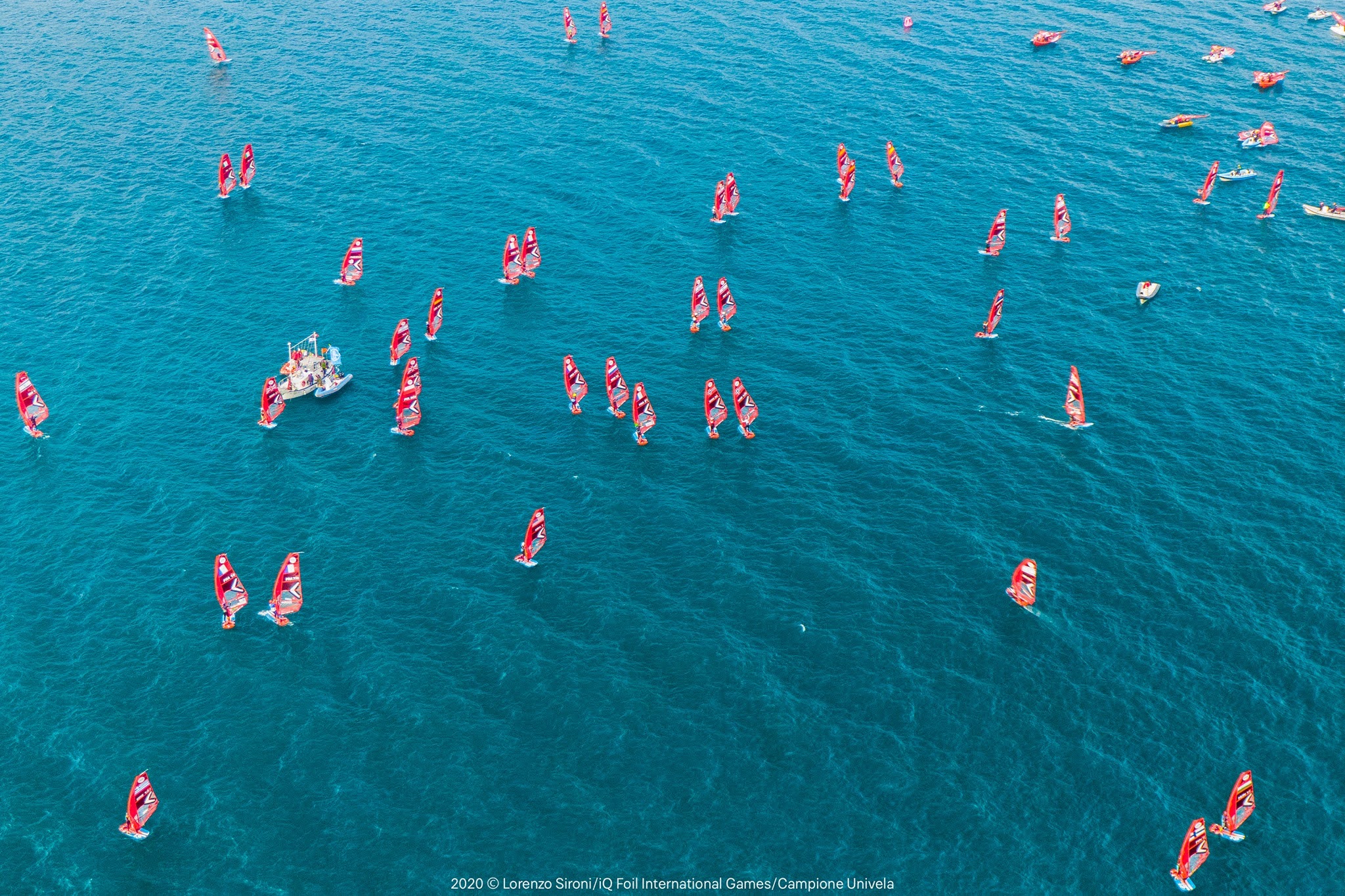 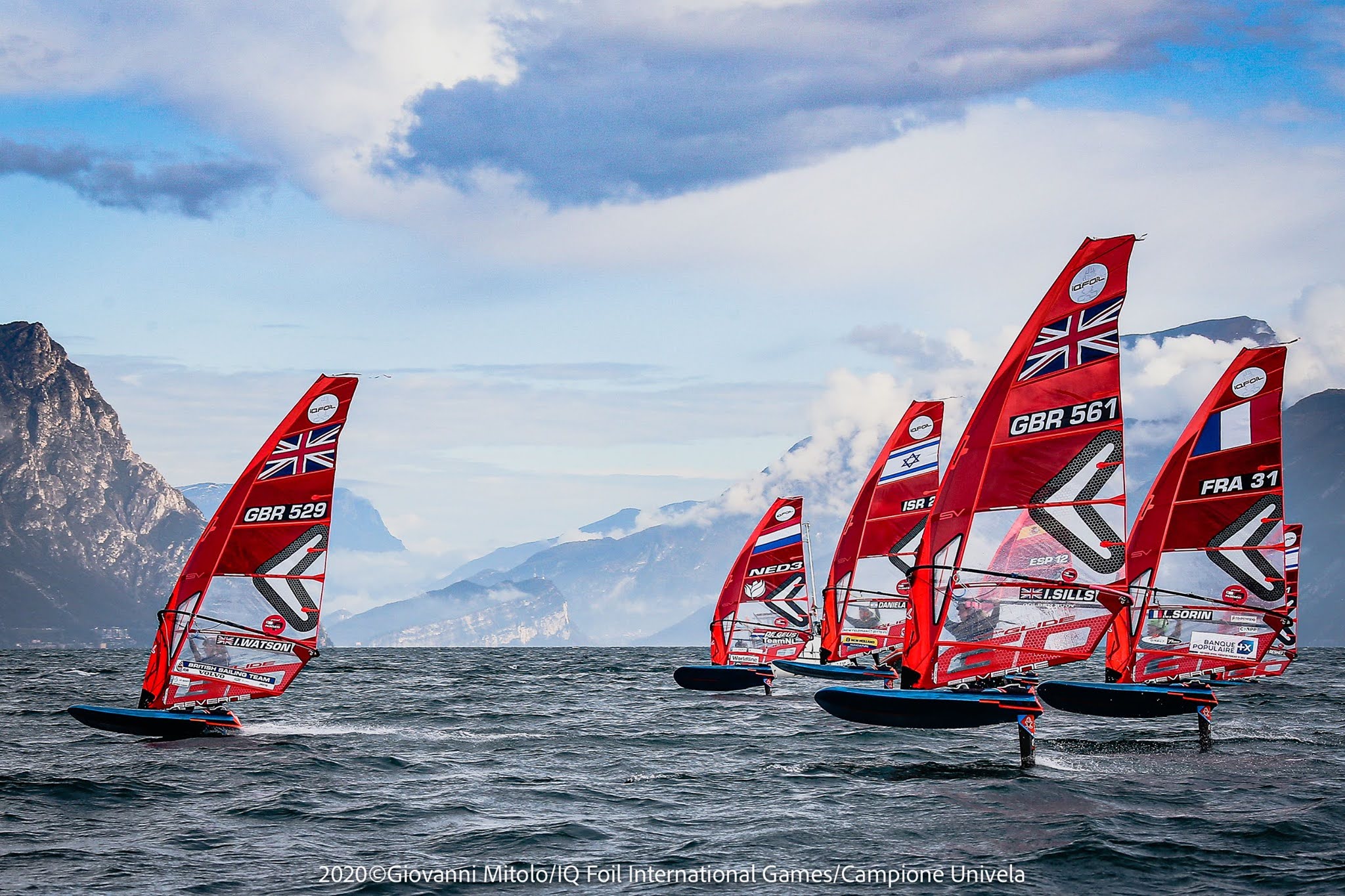 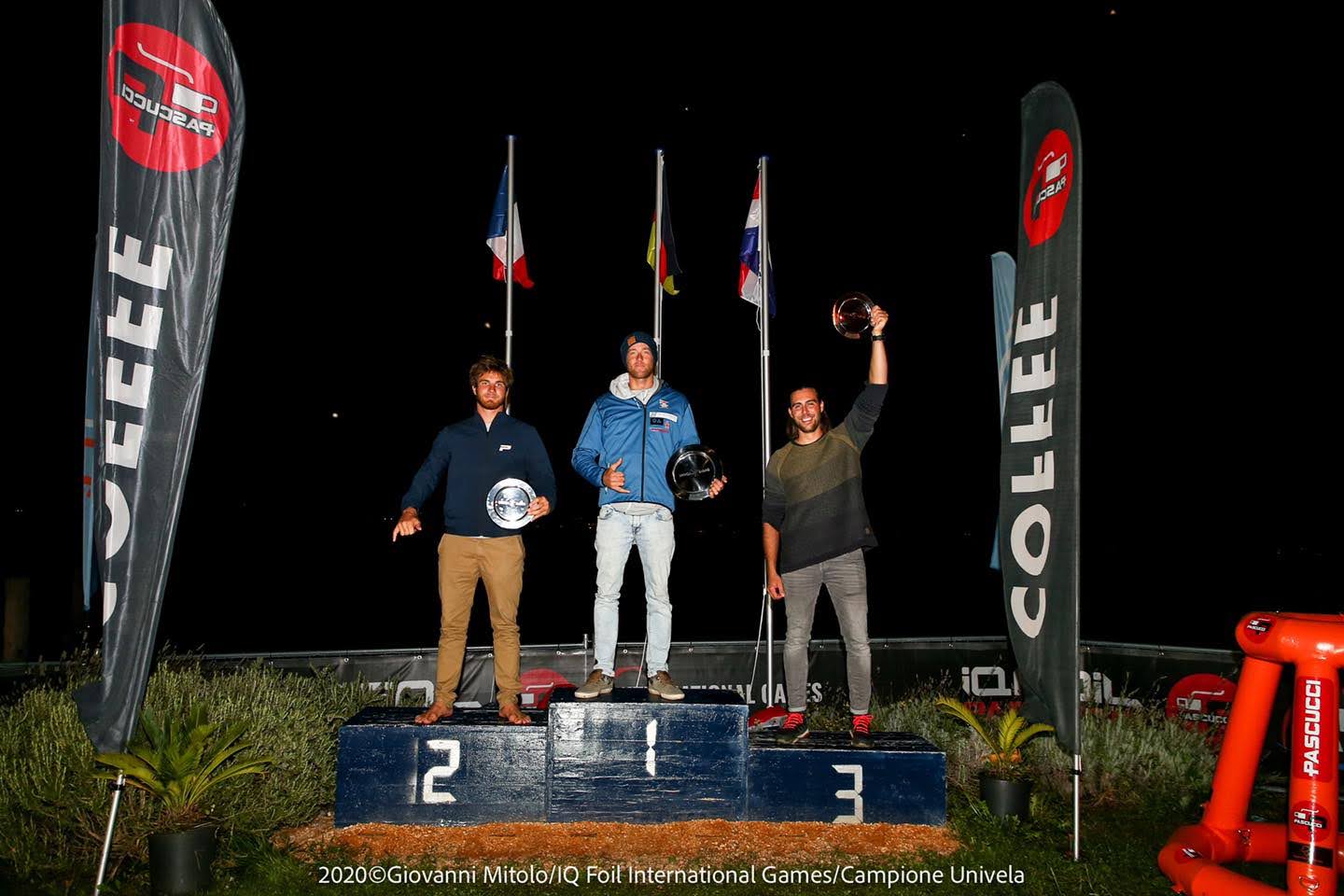 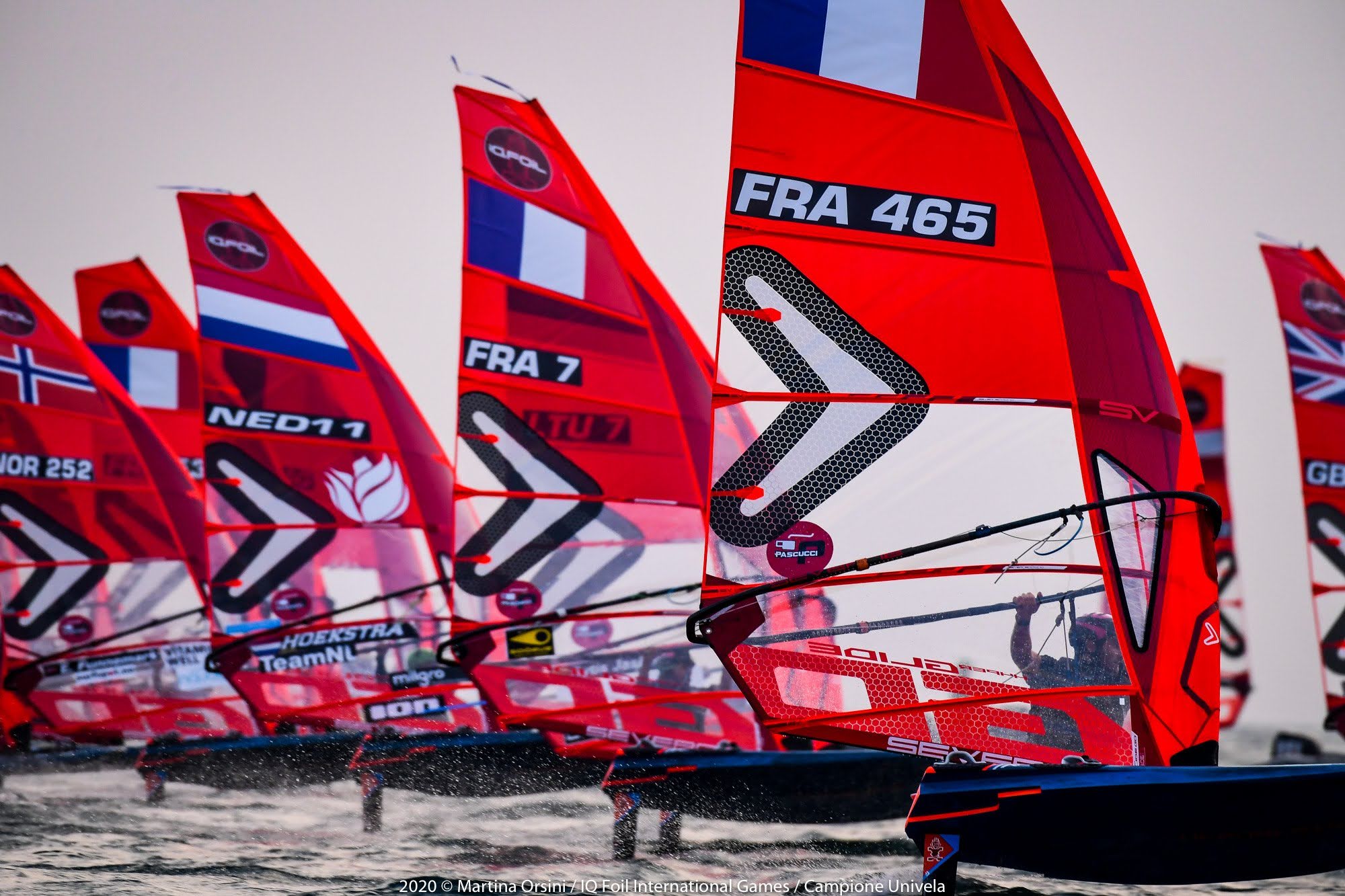 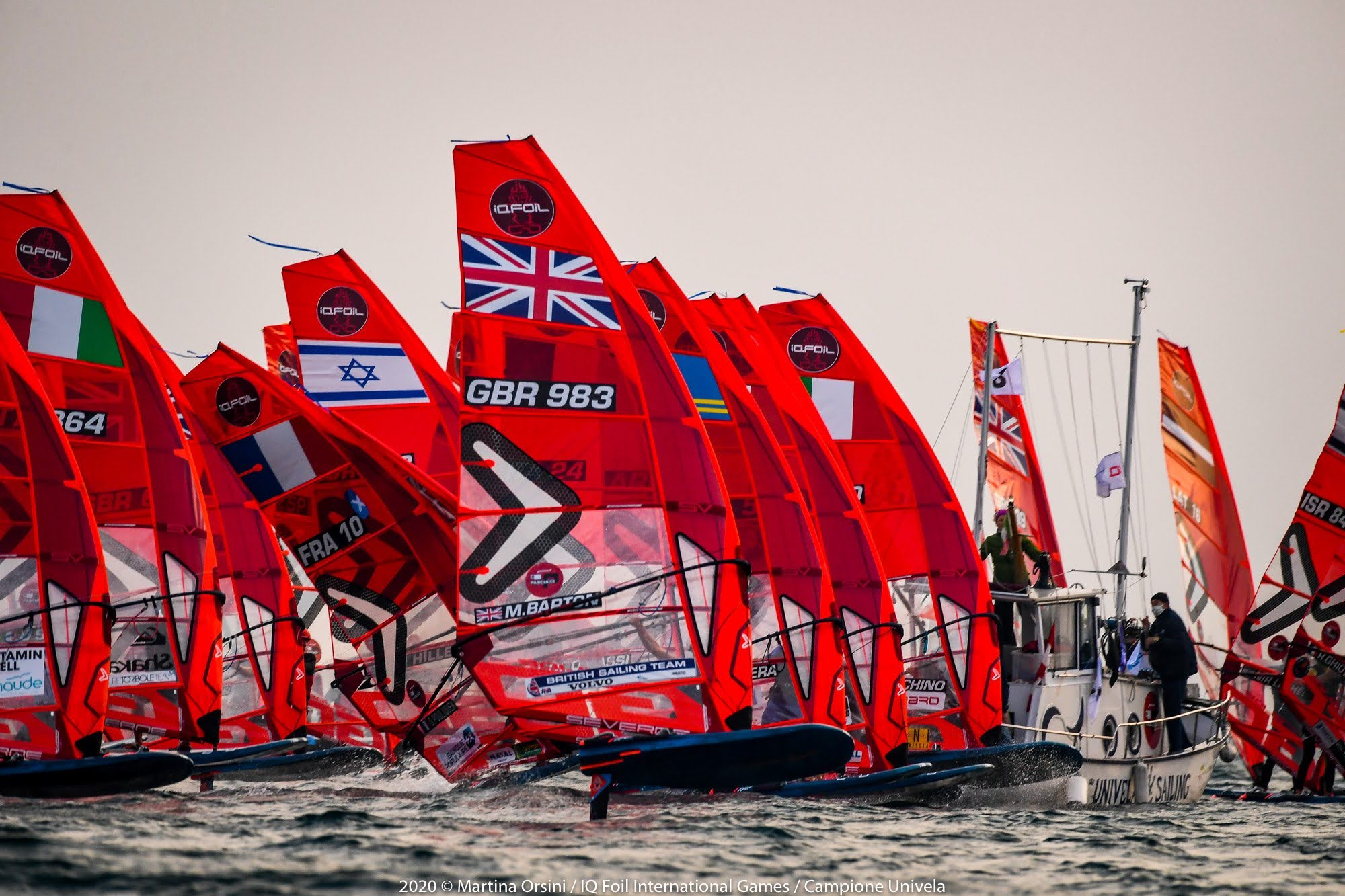 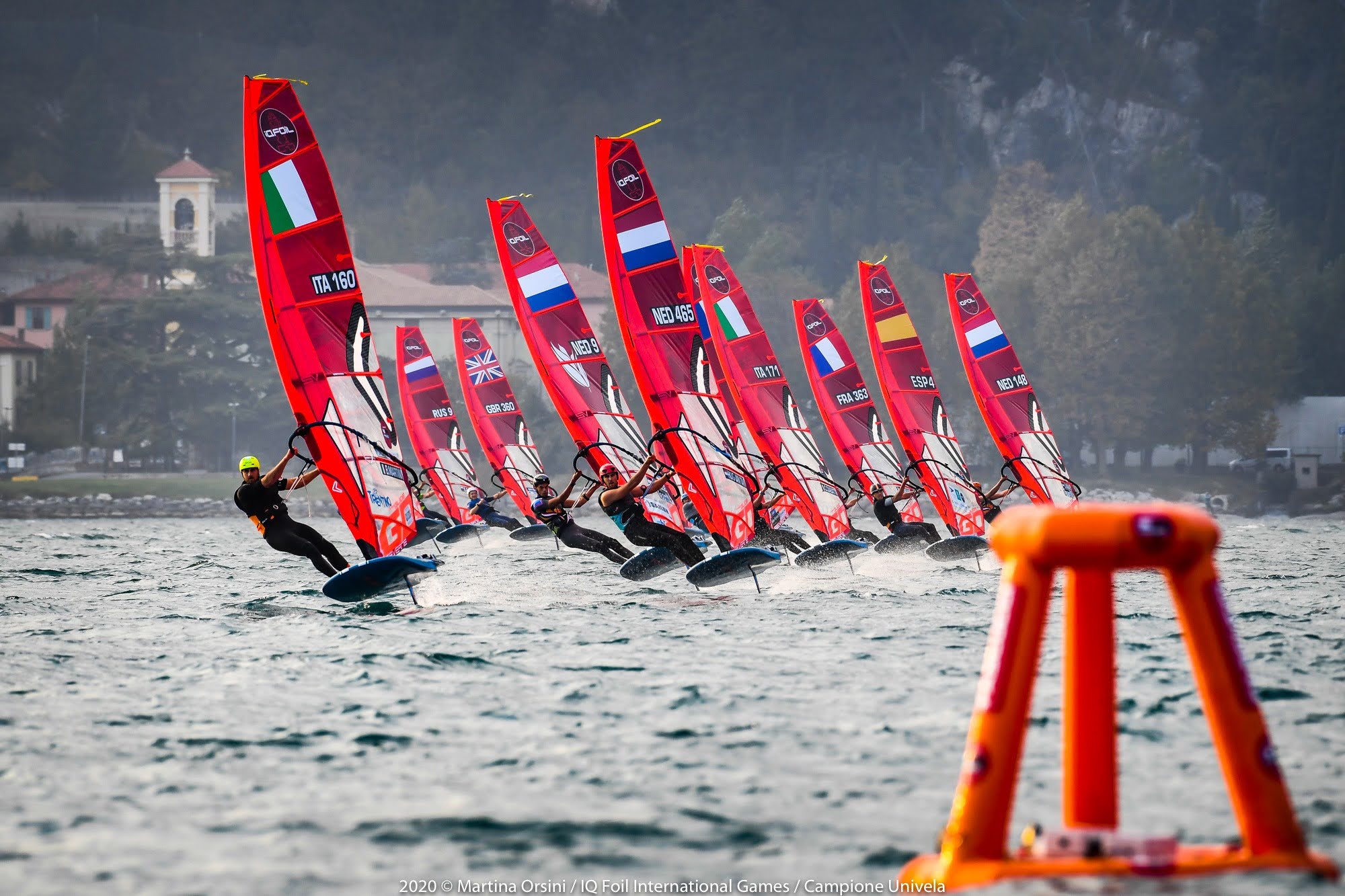 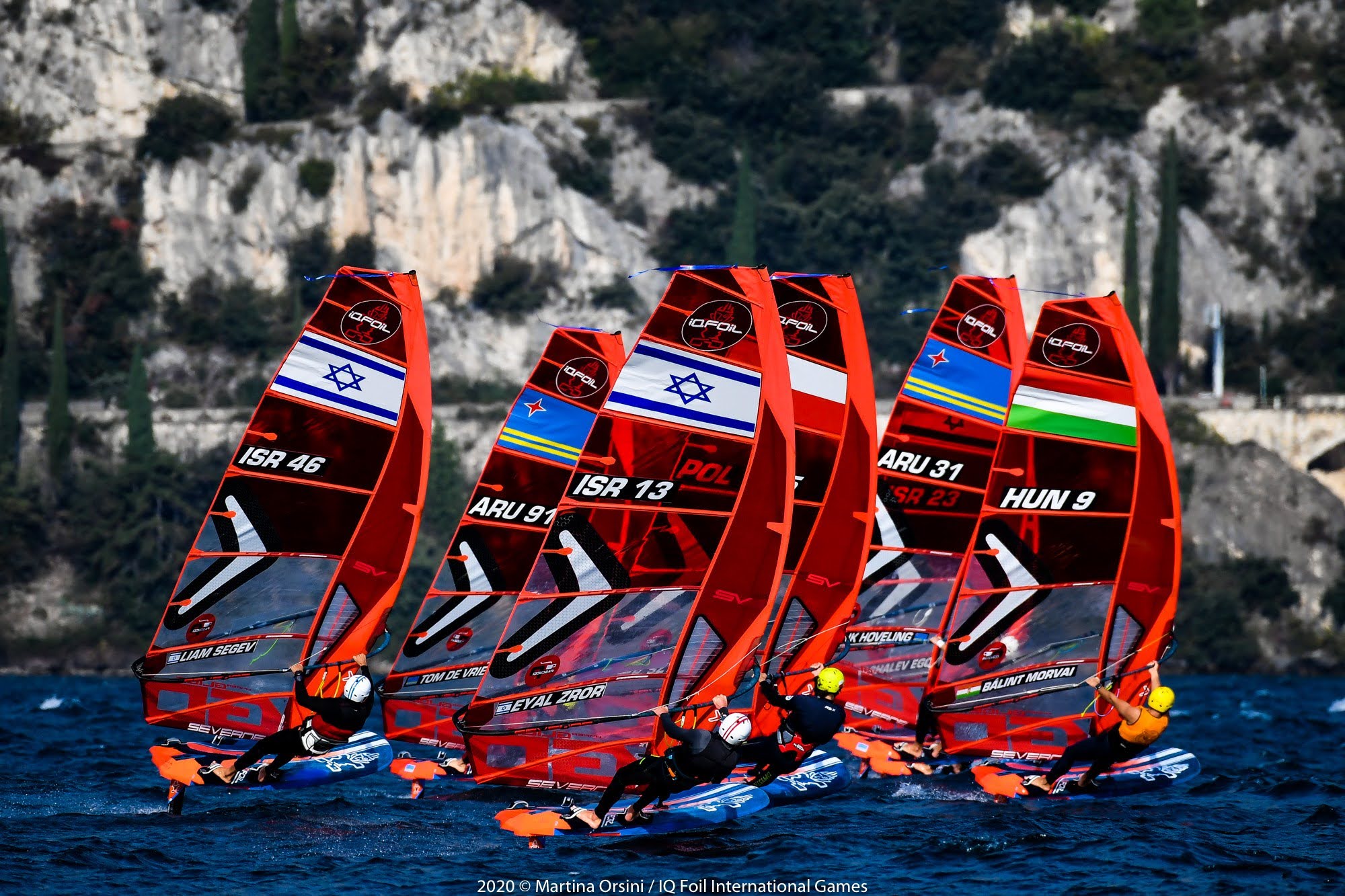 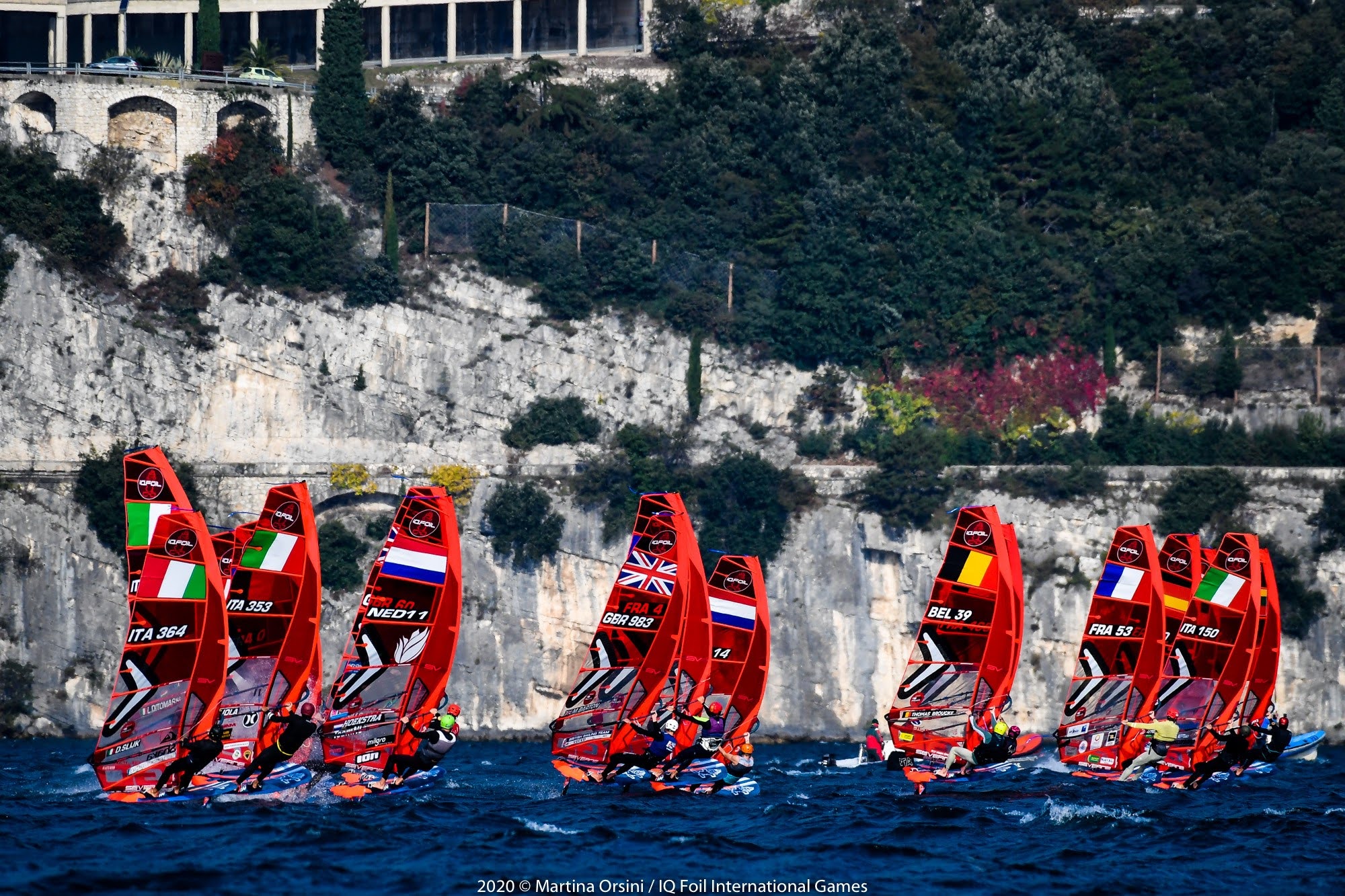 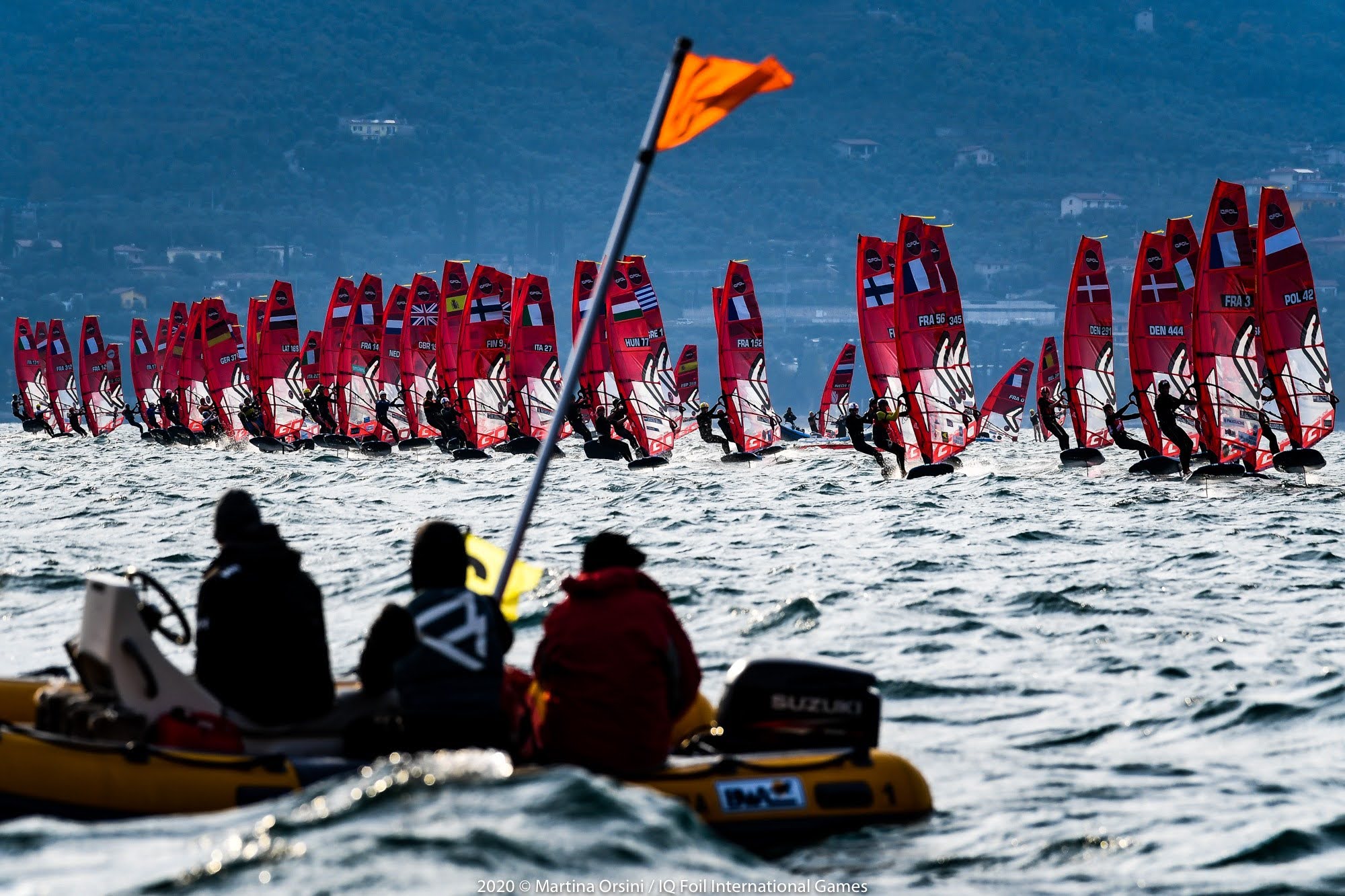